Craft, Process, and Thinking of Becoming

Today I’m working on taxes for our two college students’ FAFSAs and watching “Abstract: The Art of Design” on Netflix in the background.  Christoph Niemann is both in his story and telling his story about craft and life.  He is a character and an animated person with his character . . . and a voice.

Two of his statements struck me about the work I’m doing now on career and vocation exploration.

First: “Creating a process to do it allows you to do unembarrassing stuff on command is the only way you can survive . . . if you create an armor of craft around you.”  This makes sense from other work on creativity and boundary-setting.  We often can do better regular, daily work in creative spaces if we set hard edges around the work and create routine.  Having the skills and letting them work in focused settings then lets creative work have a place to build.

Yet Second:  “The one thing that is dangerous about working on your craft and the world around you is that it can keep you from asking the really valid questions . . . what is the real thing I’m trying to get good at?”

Intriguing question.  It isn’t “what am I good at?”  It is a sense of becoming in terms of craft, in terms of skills.  What stands in my way to “trying to get good at” something?  Fear?  Practice?  Focus?  Direction?
***
I just went to a friend’s 55th birthday party last night, and we told stories of how old we were from when we all met decades ago.  Travel and children were our benchmarks in the time road.  “How are things?”  “Great — I’m planning a trip to South Korea.”  Is how we are doing a postcard or Facebook post about the event-based measures?
The party was at an improv club, which added an oddly critical narrative layer to our gathering.  They quizzed the birthday girl about her daily life and then created an exaggerated parody of her life as a humorous struggle with time and interaction with others.  It broke away pieces of an interaction and circular time life.
None of us in our stories of the evening told stories of Becoming.
***
Two nights ago I had the honor of talking about the social impact of technology on music with a private group in Century City.  People stayed for hours, talking about our shared Becoming through streaming music’s transformation.  We talked about the Becoming from our work in the world — and continuing the conversation afterwards.
***
How do we talk about Becoming with others?  With ourselves?  Can we get caught up in so many of our busy metrics with time in a busy personal framing that we (and I) lose track of our shared Becoming stories? 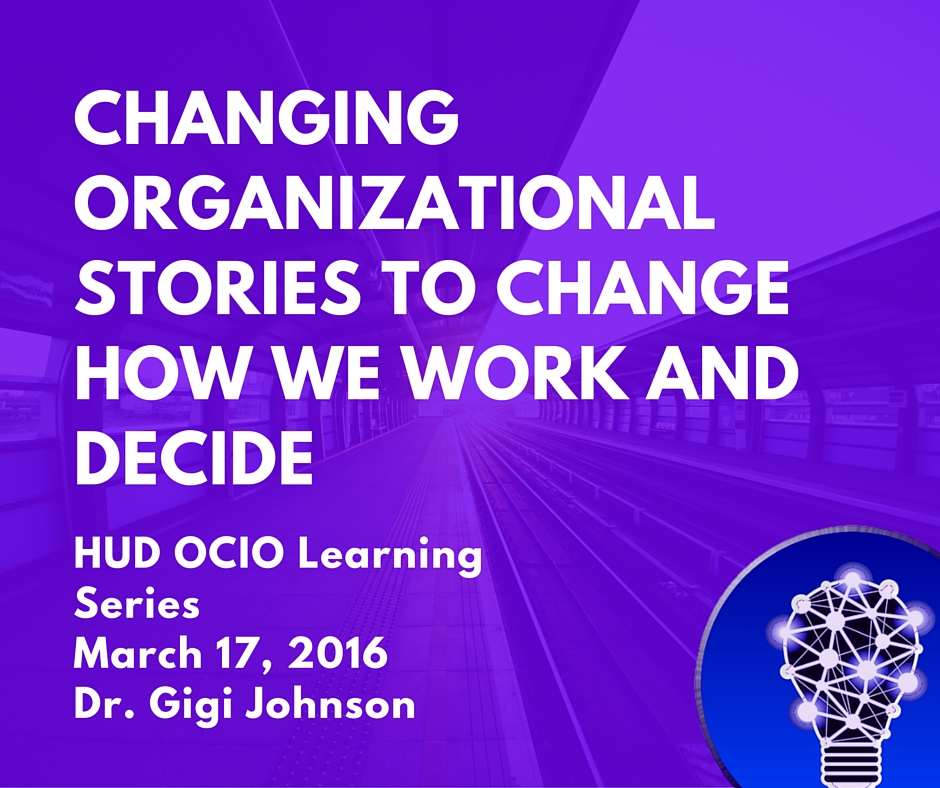 HUD: Stories on How We Work and Decide Gigi enjoyed sharing thoughts over YouTube and the US Housing and Urban Development (HUD) OCIO Learning Series.  This session was recorded in January and ran as a webinar on March 17.  You can find it now at http://portal.hud.gov/hudportal/HUD?src=/press/multimedia/videos and can watch it below.